Millsley, you have listed omega 3 and 6 EFAs, but to my knowledge it is best if you have the correct ratio of 3 to 6. Also adequate vitamin E is required to prevent/slow FA oxidation. Selenium helps here. Vitamin E has 16 components BTW

Hemp seed oil is supposed to have omega 3, 6 and 9 in the perfect ratio for the human body.

The only things i take on fairly regular basis are apple cider vinegar, blackstrap molasses, Himalayan crystal salt and  cayenne pepper and more recently a couple of drops of Lugol's each day.
Recently bought some selenium tabs but i think i could get my selenium intake by eating some Brazil nuts each day which is probably a lot better than taking the tabs.

Well let's see.....I'm back to regularly consuming these large salads full of organic (or....supposed to be organic) veggies, with a home made salad dressing / tonic.   And that does seem to make a definite difference in my energy levels.  I feel healthy afterwards.  Whole Foods Market has this great "spring mix" salad greens mixture that has red and green lettuce, spinach, dandalion leaves, a small bit of red cabbage, and a couple of other random plants, and that's the salad base, then on top of that I add three shredded radishes, (I'm a bit of a radish freak, gotta have them in my salads!!!!) two stalks of sliced celery, a shredded carrot, (sometimes two, if they're really skinny) slices of red onion (BIG time red onion fanatic!! Love them!!) and depending on the produce available, maybe either slices of cucumber or green pepper.  But all organic, no regular pesticide veggies...I hope.  Hope they're not lying.  !

For the fat in the salad (because eating loads of veggies gets tedious) I either do slices of avocado, or shredded Danish Havarti cheese, the best cheese ever in the history of cheese.

The dressing is a mix of extra virgin olive oil, and Bragg brand Apple Cider Vinegar, which comes with "the mother," which is supposed to have healthful properties.  Tasty stuff!   I add fresh squeezed lime juice to the oil and vinegar along with a hefty sprinkling of cayenne pepper (big time cayenne pepper freak here, put it on everything from pasta sauces to deviled eggs, haha) and sometimes fresh crushed garlic.   The garlic isn't for everybody, but I love it.  So, oil, apple cider vinegar, lime juice, cayenne and garlic.   It's tastier than any dressing I've ever bought in the store.  It's actually ruined me for all other dressings.

So that's my magic salad.  I first had the urge to eat these large salads back in '99, in SoCal, as well as the inexplicable urge to cut out corn syrup from my diet.  Came totally from nowhere, (although I have my suspicions.....;)  Stuff always comes from somewhere....whether beamed....or gleaned during dream time travels or abductions.....)  I'd never even THOUGHT about health at that point.  I was all about eating out fast food - burgers, fries, and ice cream, cookies and soda and sugar heavy candy since I don't gain weight, I'd just eat whatever I wanted and it was all the wrong food.  Veggies was not a part of my diet.   Later heard of somebody else we know - a lifelong abductee - who woke up one day with the urge to start making large salads for herself every day out of nowhere and get healthy.  Thought that was interesting.

For supplements there's spirulina or chlorella, biotin and silica for my hair, (have to, as noted in my "Liquid Silica for Hair Loss" thread) but silica also benefits the skin and nails as well; my Omega 3, 6 and 9 capsules that's a mix of fish, borage and flaxseed oil.  And occasionally some zinc/copper and iron.   Spirulina is one of those highly recommend things as well.  Works for me anyway, gives me a real energy boost.

And also I'm back to drinking a lot of tea, usually green, with organic, unfiltered, unheated honey made locally here in the Shenandoah Valley.  Honey's my latest obsession.  I never used to care for the stuff, then I had this local unfiltered "summer thistle" honey made by Golden Angels Apiary in Singer's Glen and now I'm hooked.  I'll like, spoon it out of the jar.  Terrible new habit I tell you.  haha

Also trying to cut back on meat consumption.  I'll never be fully vegetarian I don't think, but, I eat meat far less than I used to.   Instead I'm back to eating the mix of black beans with brown rice with seasonings, chopped onions and melted cheese.  Very tasty protein substitute and good for you to boot. (for vegans, just scrap the cheese obviously.)

Oh yeah, and for snacks lately I've been eating this maple nut granola mixed into plain yogurt with chopped bananas in it.  The maple and nut matches well with the bananas and reminds me of the flavor of banana nut bread.

As far as being healthy goes in general, I waiver back and forth to making an effort to being completely lazy.

"Life's journey is not to arrive at the grave safely in a well preserved body, but rather to skid in sideways, totally worn out, shouting "Holy shit ... what a ride!"  - Anonymous
-----
"I get by with a little help from my (higher density) friends."
-----

I'd never even THOUGHT about health at that point.  I was all about eating out fast food - burgers, fries, and ice cream, cookies and soda and sugar heavy candy since I don't gain weight, I'd just eat whatever I wanted and it was all the wrong food.

I used to like to eat fast food and meat because I never really get any bigger.
Now you mention honey and organic salads... You're making me hungry!

Spinach was my only green leaf vegetable I would eat raw. Then got tired of that and start eating chips and "normally". What I mean normally is by looking for something good to eat in the fridge and eat it. When I cut down on meat, my skin turned healthier and I was happy about that.

It's surprising how my mom makes all these food but the veges are quite limited. Not much organic food, though different varieties of meat - Which caused some trouble due to my new 'diet'.

Yes - hemp as well as flax are good choices for EFAs Doc.  I use a combination of 5 oils (plant derived not fish).

I agree with Lyra and others - Spirulina and ACV for 2 things are worth at least a try.

Love is Knowledge is Light

Hey Piece!  I've got gotten on the organic apple cider vinegar kick myself only recently. "They" say that only organic will do, not the mass produced and processed stuff.  I think of it as a health tonic.   I mix a few tablespoons with a quart of water and sip on it all day at work.  It does seem to help my energy level but hey, I don't know if it's honestly making any difference.  I expect a lot, and quickly! however from these natural old health remedies!  It sounds weird but I'm kinda addicted to the taste, esp. ice cold out of the fridge.

I've also started with Tesla- inspired silver water.  It's got some kind of cool Tesla vibration put in the process. (clearwaterherbs.com)   I drink one ounce of that every morning.  I just started that a couple of days ago so I'm not sure what's going on there either.  My wrinkles aren't gone yet, and I'm not even sure if I had any internal bugaboos to begin with!

But it is harmless so I thought let's give it a shot.

I eat healthy, very little junk food.  I just started on an Indian curry kick.  Wow!  That food is so exotic, spicy and full of veggies it's got to be great for ya!

I exercise a few times a week but need to motivate myself to do more.

Oh yeah - me and the cat have a lot in common too.

hi five (get it high five haha) You sound like your alot healthier than me  thats why you didn't notice a big difference like me, I'm used to feeling like crap. That tesla water sounds very mysterious

, sounds like some of the weird things i try. I need to develop more of a routine, being a gemini I am terribly disorganized.:)

wow, you must be very atlethic than, with all this runtine, do your work? i'ts kind of hard for me because i'm not home alot, i work so it's hard for me, but i'm taking vitamins and i do exercise at work all the time, i think i'm healthy, but i'm not a doctor...
you must look good, post a picture:D

Aw shux maricela, there is no need for me to post a picture just picture a stud in your mind and thats pretty close to what I look like

Nexus, with nutmeg they are a 'killer' combination.

'Brussels Sprouts' really are spreading fast. How did they get to Australia ? 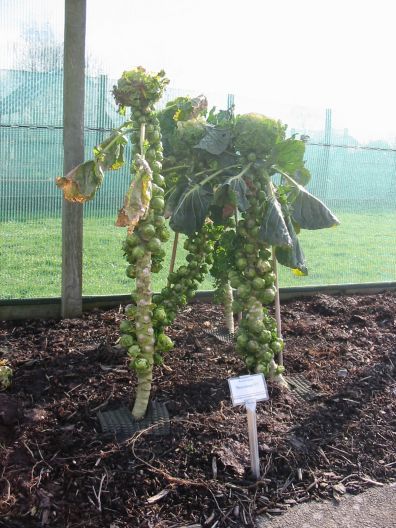 (Tom, if neccesary put this in the alien & matrix departement.)

"All children are artists. The problem is how to remain an artist once he grows up."
Pablo Picasso